WOMEN ARE EVERYWHERE,
WHERE IS ANGOULEME?

Women are everywhere, even in comics, but the organizers of the Grand Prix d’Angoulême, this year at its 43rd edition, never noticed. Certainly this is not the only field where this happens. Now the Colléctif des créatrices de bande dessinée contre le sexisme has taken a stand against this denial, inviting the organizers to open their eyes to reality.
This Colléctif deserves a prize for exposing the chauvinism and anachronism of the Angoulême Grand Prix.
At this point, the Grand Prix becomes so undesirable that we dare to wish that neither the women in the Colléctif, nor other eligible ones, will be so unlucky as to receive it in 2017.
The Colléctif affirms its intention to “support feminism in the comics’ world”, so I feel concerned on a plan that’s been the base of my work for four decades.
I aknowledge in their words a urgency born of rage and I understand their yearning for justice. I’m sorry, nevertheless, that their protest sounds as a vindication of a right of equality man/woman, in the language of institutional equal-opportunity feminism, a language that’s very far for the freedom of comics and the irony of women.

“Why should what is female be considered outside the universal?” ask in their manifesto the women of the Colléctif.
Since its very beginning, independent and radical feminism has struggled to unmask the so-called universal, which is a fake because it is in fact the masculine in disguise. Why should women reclaim inclusion in the hoax of universal? I cannot avoid this question, if I care for my authenticity.
Women cartoonists can, with the wild bravado which is part of their talent, deflate the balloon of universal.
Where is the brave Iranian little girl of Satrapi autobiographical novel, I wonder. Surely the author of Persepolis, a brilliant tale of feminine freedom, cannot be an easy prey to the rhetorics of Western democracy, imbued with hypocrisy and abstract vindications of rights.
Thank to the testosterone lobby, in the world of the ninth art, with its apparatus of awards and big words, it’s mostly men names the ones that resound.
On the other side, women cartoonists are by now everywhere. Last January, the Swede Liv Strömquist has declared in an interview to Libération: “This it’s the golden age of women cartoonists”.
Women have to find their strenght in themselves, in their own concerns and places. Since the Seventies, feminism has created magazines, books, exhibitions, bookstores, workshops and reading groups, has published stripes, has focused on women’s work in magazine such as Wimmin’s Comix in California, Ah! Nana in France, Strix and Aspirina in Italy, Spring in Germany, and organized festival such as Bande des Femmes in Rome, conferences like those of Liza Donnelly all around the world, and so on, in a thick net.
In the last decades women have learned to give recognition to women artists, cartoonists or writers that have inspired them and have become models for a feminine genealogy as a brigde toward future.
This kind of experiences and relationships have encouraged many of us who wanted to create cartoons, at the same time stimulating the attention of the feminine audience toward an art that, for many reasons, was far from their interests.
The strenght we have gathered cannot be reduced to egalitarianism and its cage.
Women are everywhere, was the main caption of an issue of Via Dogana, the magazine of the Milan Womens’ Bookstore. Women are everywhere, where is Angoulême? Is the question asked by Aspirina, who is looking forward to host on its pages the cartoonists of the Colléctif.
Our worldwide award consist in a hearty, shared laugh.
Milano, February the 26th, 2016 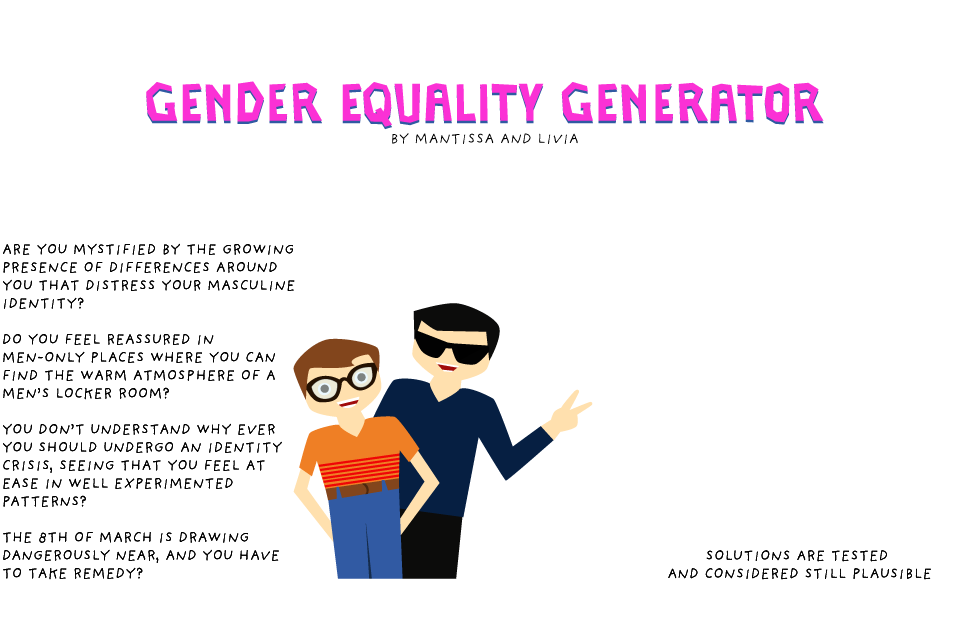 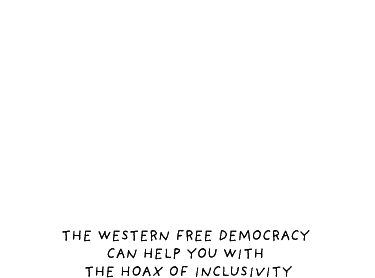 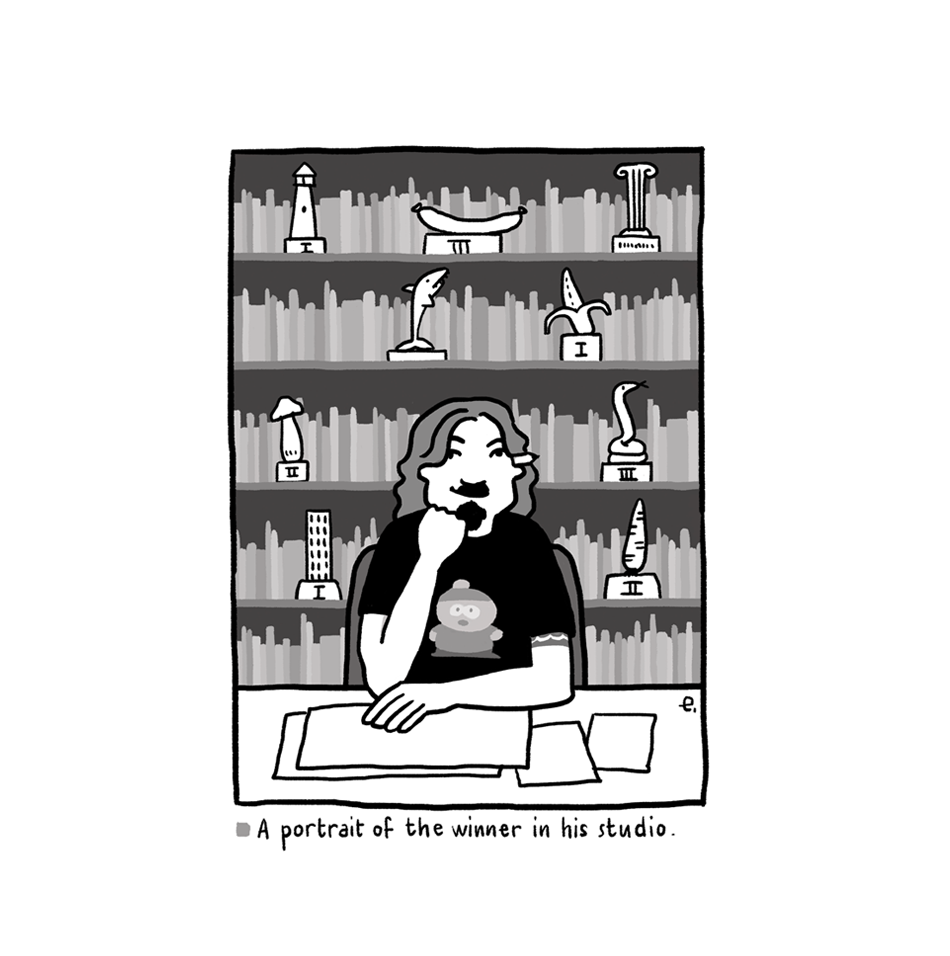 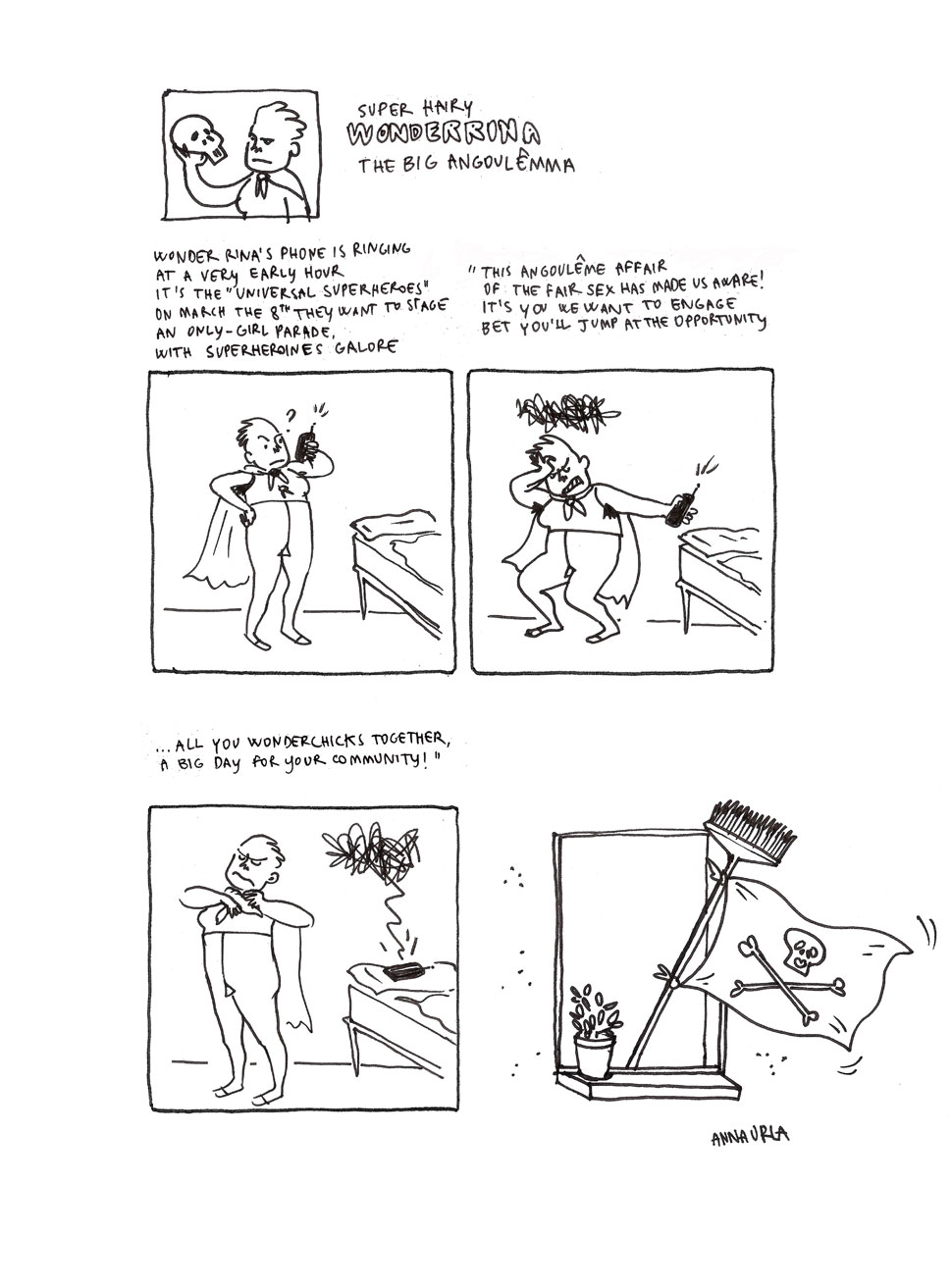 Genesis on a rainy day

One day that Adam didn’t know what to do
- it’was raining, and Eve giving birth to some brat -
he fell prey to an existential void that was all new.
Dejected, he looked down between his navel and knee
and saw the One, the All, the Universal, the This and That
- he had had mushrooms for breakfast -
and divinely inspired he begot (he could too!)
Aristotle and Plato, Saint Thomas the Aquinas
and Napoléon and Robespierre and Micky Mouse,
then cardinals and ayatollah, and the rabbis don’t forget!
All the while Eve went on churning out more brats,
- and today at it she’s still oh! so busy -
bulls and chicks, mama’s boys and cannon fodder,
real men, loose women and queer theorists,
and also, workaholic as she is, doing his job
for him, some ambitious daddy’s daughters. 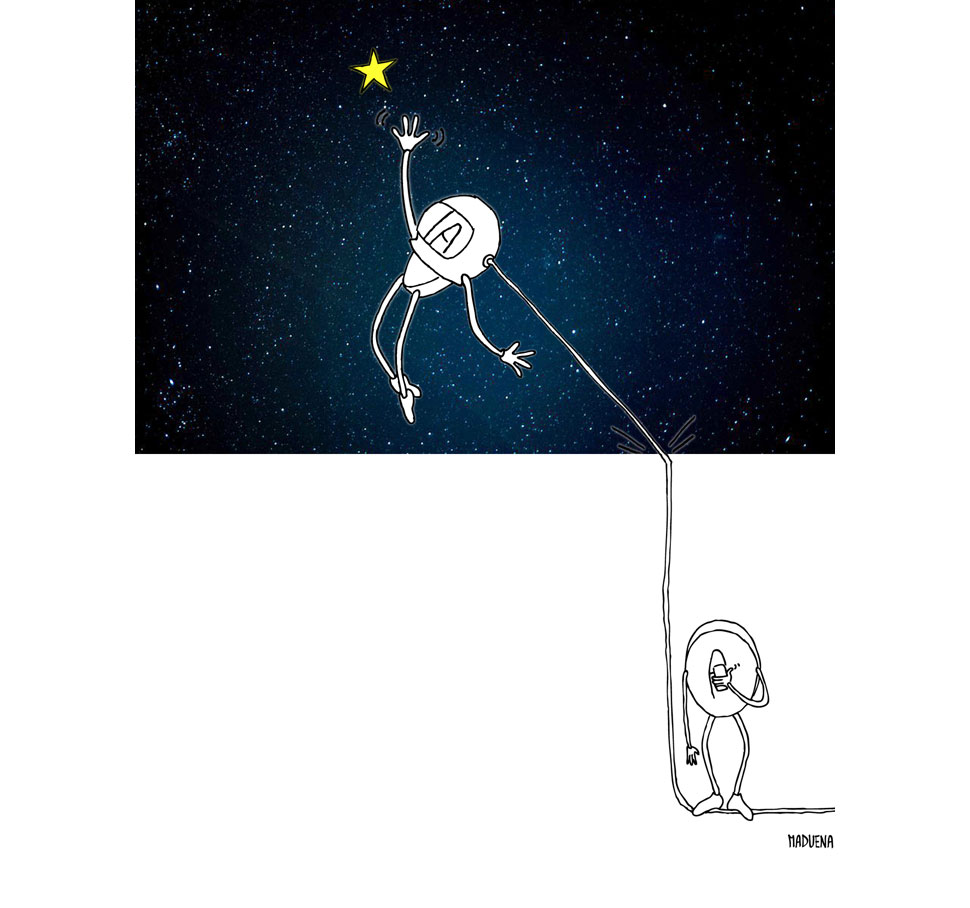